The Flag of Bonaire: Meaning and History

You are here: Home / News / The Flag of Bonaire: Meaning and History

How it all started 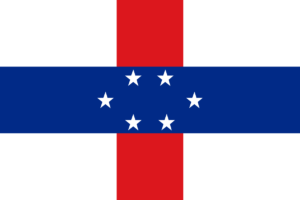 There used to be one flag for the Netherlands Antilles. This flag was white with a red vertical band in the middle and a blue horizontal band on top. In the center of the flag, there were 6 white stars representing the 6 islands of the Netherlands Antilles: Curacao, Aruba, Sint Maarten, Statia, Saba and Bonaire. Short after the Secession of Aruba in 1986, the Bonaireans felt the need for a flag of their own as well. After a number of designs, some of them including a flamingo, a definitive design was chosen. The flag of Bonaire, as we know it nowadays, was instated on December 15th, 1981.

Meaning of the flag of Bonaire

The flag is rectangular with diagonal bands in yellow, white and blue. Also, it includes some red and black. The colors and symbols are mathematically placed.

The white band represents peace and freedom. The blue band represents the sea, an important life source for the people on Bonaire. The yellow band in the upper left corner stands for the sun and the flowers. This band used to be red, referring to the Dutch flag. However, to prevent two separate red sections on one flag, the band was turned into yellow. So the yellow stands for the sun and flowers, this is in particular about the Kibrahacha Tree, one of the most spectacularly flowering trees on Bonaire. This tree normally looks quite drab, but only once a year the Kibrahacha blooms! The tree breaks out in an overwhelmingly colorful display of yellow. Find out more about Bonaire’s nature in this blog. 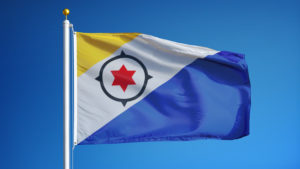 The black circle symbolizes a compass, referring to the image of the Bonaireans as good sailors and fisherman. The triangles on the circle stand for equality for people from all corners of the world. It also refers to North, South, East and West. Then, the 6-pointed star represents the 6 original settlements on Bonaire. Rincon, Antriol, Playa (now Kralendijk), Nikiboko, North Saliña and Tera Korá. The star’s red color symbolizes the blood and survival power of the Bonairean.

About Tropical Nature Dorian Crespo, the founder and owner of the Bonairean Company, Tropical ... END_OF_DOCUMENT_TOKEN_TO_BE_REPLACED

In celebration of World Oceans Day, Bonaire proudly announces the development of a multifaceted ... END_OF_DOCUMENT_TOKEN_TO_BE_REPLACED

The Bonaire Hotel and Tourism Association (BONHATA) is proud of the Bonaire Culinary Team 2018 and ... END_OF_DOCUMENT_TOKEN_TO_BE_REPLACED