2017 Turtle Nesting Season Has Started!The first sea turtle nests of the 2017 nesting season have been laid!

You are here: Home / News / 2017 Turtle Nesting Season Has Started!

Sea Turtle Conservation Bonaire (STCB) is excited to share that the first sea turtle nests of the 2017 turtle nesting season have been laid! This year’s nesting season started on King Willem-Alexander’s birthday, when the first loggerhead nest was laid on Klein Bonaire.

During the nesting season, which normally runs from April to January, STCB staff and trained volunteers patrol the beaches most used by turtles, recording signs of nesting and hatching, as well as monitoring the safety status of nests. The organization also invites Bonaire residents and tourists to join a sea turtle nest monitoring patrol on Klein Bonaire. STCB’s Project Coordinator Dr. Sue Willis: ‘’We will take you in our boat to Klein Bonaire. There you will be walking along the 2 kilometer beach with STCB’s turtle experts looking for turtle tracks, both from adult females coming on shore to lay their nests and also from newly hatched sea turtles.’’ STCB organizes nest monitoring patrols on Klein Bonaire every Monday, Wednesday and Friday morning. 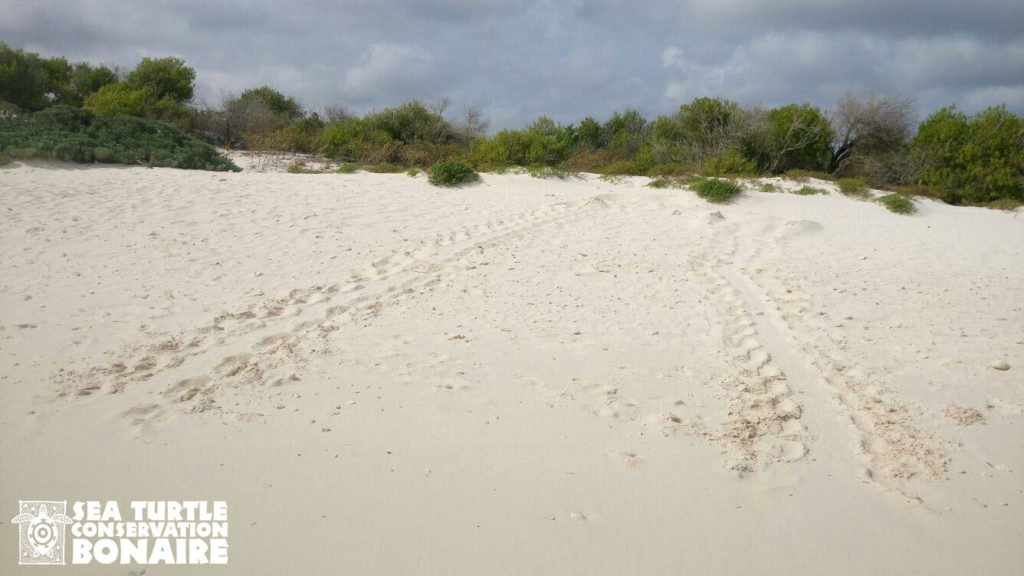 Local companies can also help STCB protect the sea turtle nests that are laid on Bonaire’s beaches by adopting a nest. Companies can Adopt-A-Nest, and thereby link their brand to the protection of Bonaire’s most iconic wildlife, by donating $600. The money raised through Adopt-A-Nest helps STCB to relocate nests that are in danger of drowning, to rescue newborn turtles that become wrapped in roots during hatching, to sustain the popular Beachkeeper program and to collect data that will help STCB to protect nests better, as well as reveal the health status of Bonaire’s sea turtles.

If you would like to join STCB on a patrol, or if you are interested in adopting a nest, please contact STCB’s Communications and Fundraising Officer Kaj Schut at cepa@bonaireturtles.org.

Sea Turtle Conservation Bonaire (STCB) is a non-governmental research and conservation organization that has been protecting sea turtles since 1991.

About Tropical Nature Dorian Crespo, the founder and owner of the Bonairean Company, Tropical ... END_OF_DOCUMENT_TOKEN_TO_BE_REPLACED

In celebration of World Oceans Day, Bonaire proudly announces the development of a multifaceted ... END_OF_DOCUMENT_TOKEN_TO_BE_REPLACED

The Bonaire Hotel and Tourism Association (BONHATA) is proud of the Bonaire Culinary Team 2018 and ... END_OF_DOCUMENT_TOKEN_TO_BE_REPLACED